Oh No! Another over-scaled, over-wrought hotel crammed onto First Street.
This one is more apartment-looking than the previous version, an advantage if the tourism market crashes at the end of this hotel bubble.

A well done study, but one that has as its purpose the development and marketing of yet another tourist attraction to further urbanize the Napa Valley, adding to the many impacts that are degrading what was until recently a prized rural, small-town quality of life.

It has come at least one building approval too late. From the article: "city leaders can ...consider zoning that would prevent new construction from blocking views of the river and Napa Valley edges". It was obvious that the Black Elk hotel was a bad idea from an urban planning standpoint when it was proposed (see update 7/14/17 here) and yet it was approved anyway. Coming a year after the Black Elk approval, It could be that this study was a result of that unfortunate event. (Or perhaps it was in reaction to the massive Wine Train Hotel proposed next door. Or the Foxbow Hotel just kitty corner. Or maybe it was simply a reaction to the already built, noisy and tacky "The Studio", the true definition of a tourist trap venue.)

Why do government leaders always take action after the fact - waiting for problems to become insoluble before trying to solve them? 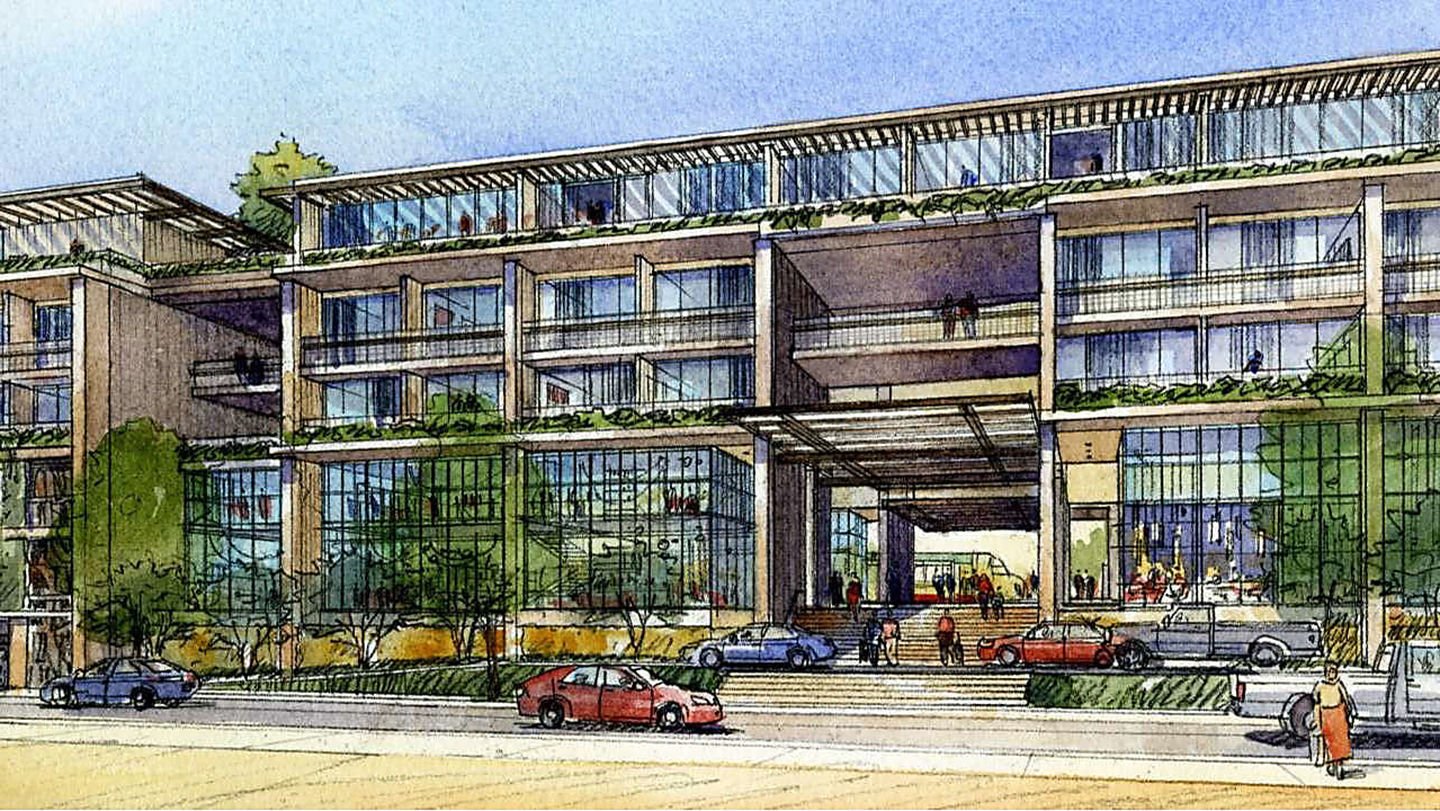 The Black Elk Hotel had a preliminary review by the Napa City Planning Commission on July 6th 2017. The Staff Report and Documents are here. It is a very innappropriate building for the location, out of scale, a visual barrier to the Oxbow district, of "barnish" shape and materials out of place in its urban setting, a box of a building trying to squeeze as many hotel rooms as possible on the small site, which brought to mind a 19th century tenement house.

What became very apparent here, and in all of the hotel projects in the news recently, is that the city has no master plan for the development of the city, no commitment to integrate housing and real people and businesses into the tourism economy, and no design guidelines to regulate what the character of the place will become. As with the rural areas of the county, the future of Napa City is being irrevocably altered in this developer boom period, and the Planning Commission decisions about Napa's future are being made on an ad hoc basis, one isolated project at a time, without looking at the long term result. Which, of course, will be a hodgepodge of developers' schemes, some with good taste and some without, trying to maximize the money to be made from the tourist trade on every square inch of the city, while the residents are forced out.

The answer: a few. Napa, as a high-end retreat for the wealthy (i.e. Meadowwood and Auberge du Soleil) is already losing its luster as the number of tourists keeps increasing and the marketing of food and wine through winery experiences becomes a mass market entertainment. (And as the traffic jams increase and the natural beauty of the landscape is diminished by building projects). In the short term, as long as the tourism numbers keep expanding there will be a percentage that can be convinced to spend $1000 a night for their image of the good life. The question is whether the construction of pricey hotel rooms will outpace the ability of Visit Napa Valley to sell the region's exclusiveness while marketing to the masses as well. If not, as all of the rooms come online, the prices will probably begin to fall to a rate in line with the rest of the world's tourist destinations.

Healdsburg leads the way. Of course, as usual, government has acted to solve problems when the problems are already beyond being solved. The already-approved doubling of hotel rooms will give Healdsburg the feeling of a 24-hour tourist trap, and future affordable housing requirements will not ease the existing or approved shortfalls. Unless the affordable housing offsets are actually sufficient to house the employees of the hotels in question, new hotels will continue increase the burden on the city to provide affordable housing and the problem will never be solved, only exacerbated. 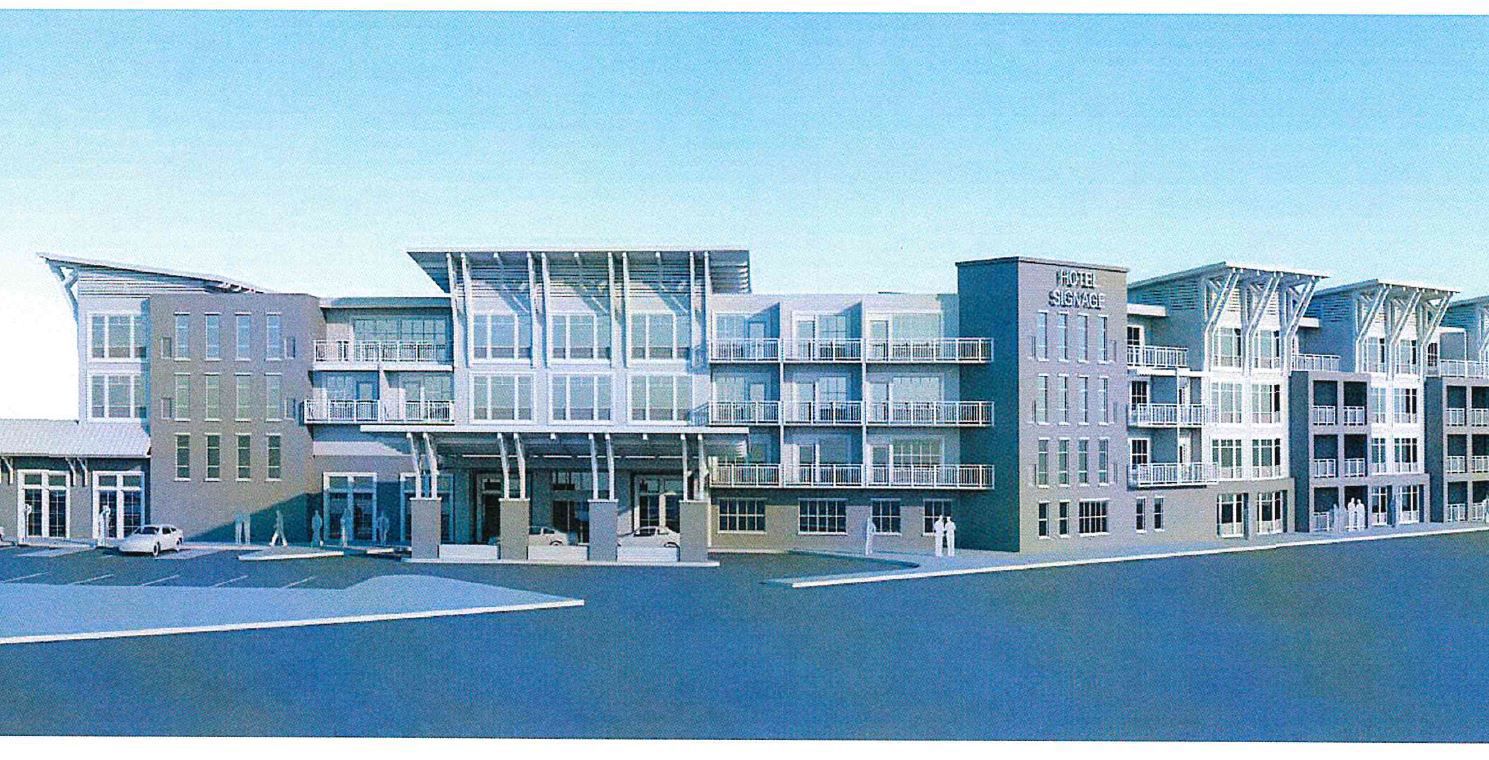 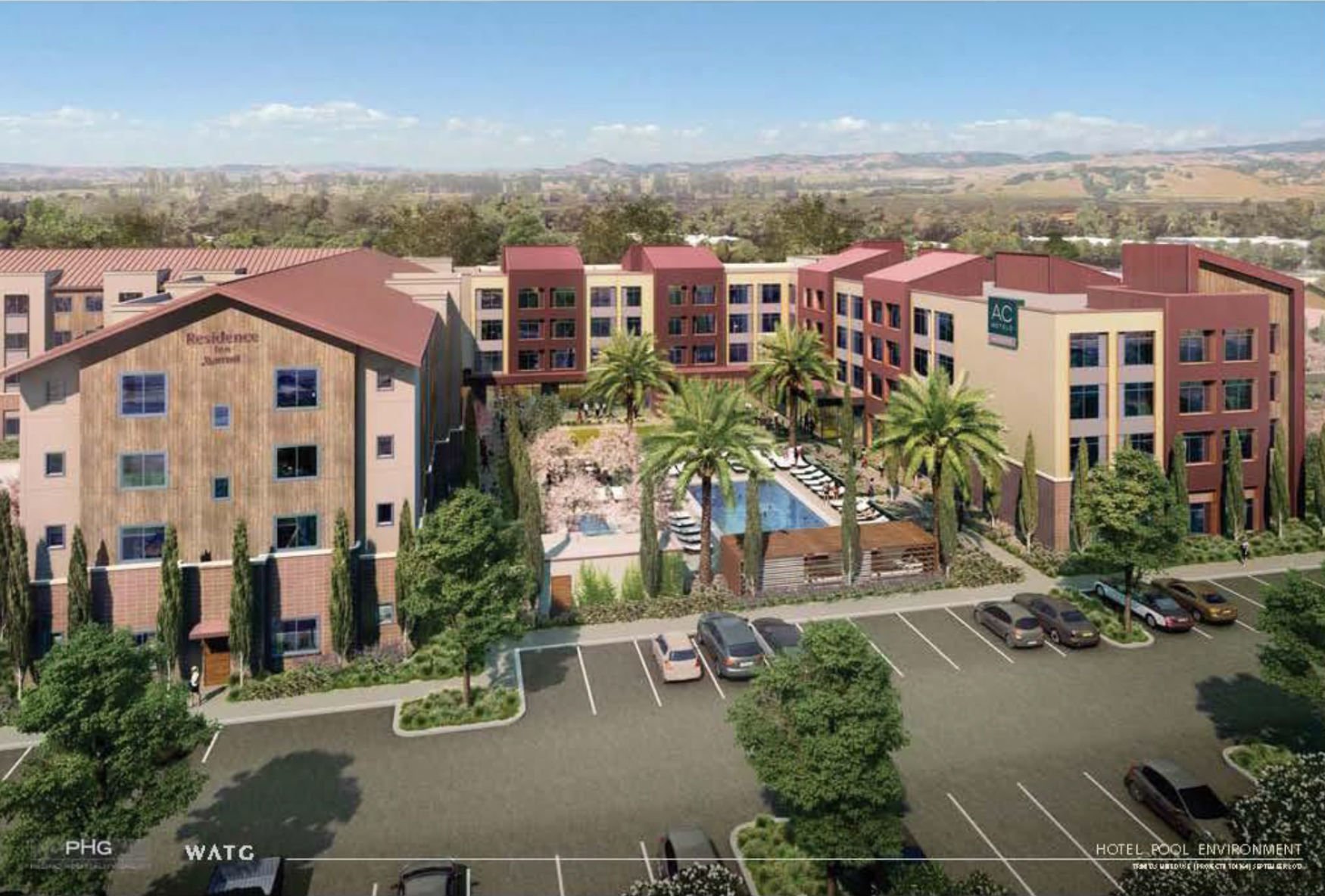 It is great to see that even some of those members of our county governments that have been supporters of tourism development have begun to believe that continued expansion of the tourism industry is unsustainable if the goal is to retain the rural small-town character that draws tourists here and makes this a desirable place to live. There needs to be a limit of tourism activity in relation to real life or real life ceases to exist. Many already feel that line has already been crossed, and the vast increase in hotel rooms in the municipalities and wineries in the county already in the pipeline means that the tourism impacts we already feel will only get worse. But If more of our officials, like Mr. Mott, are willing to begin opposing tourism urbanization now, and begin thinking in terms of a sustainable stable economy rather than a unsustainable growth economy, there may still be some hope for the survival of a quality of life treasured by both visitors and residents in the future.

While it's hard to compare the nebulous disorganization of Napa's downtown with the iconic organization of Healdsburg's town plaza, the impacts here of rampant tourism development will likewise wipe out any sense of "small town" character that Napa does possess as 5 and 6 story hotels, and the throngs of their patrons, begin to dominate the Napa streetscape. 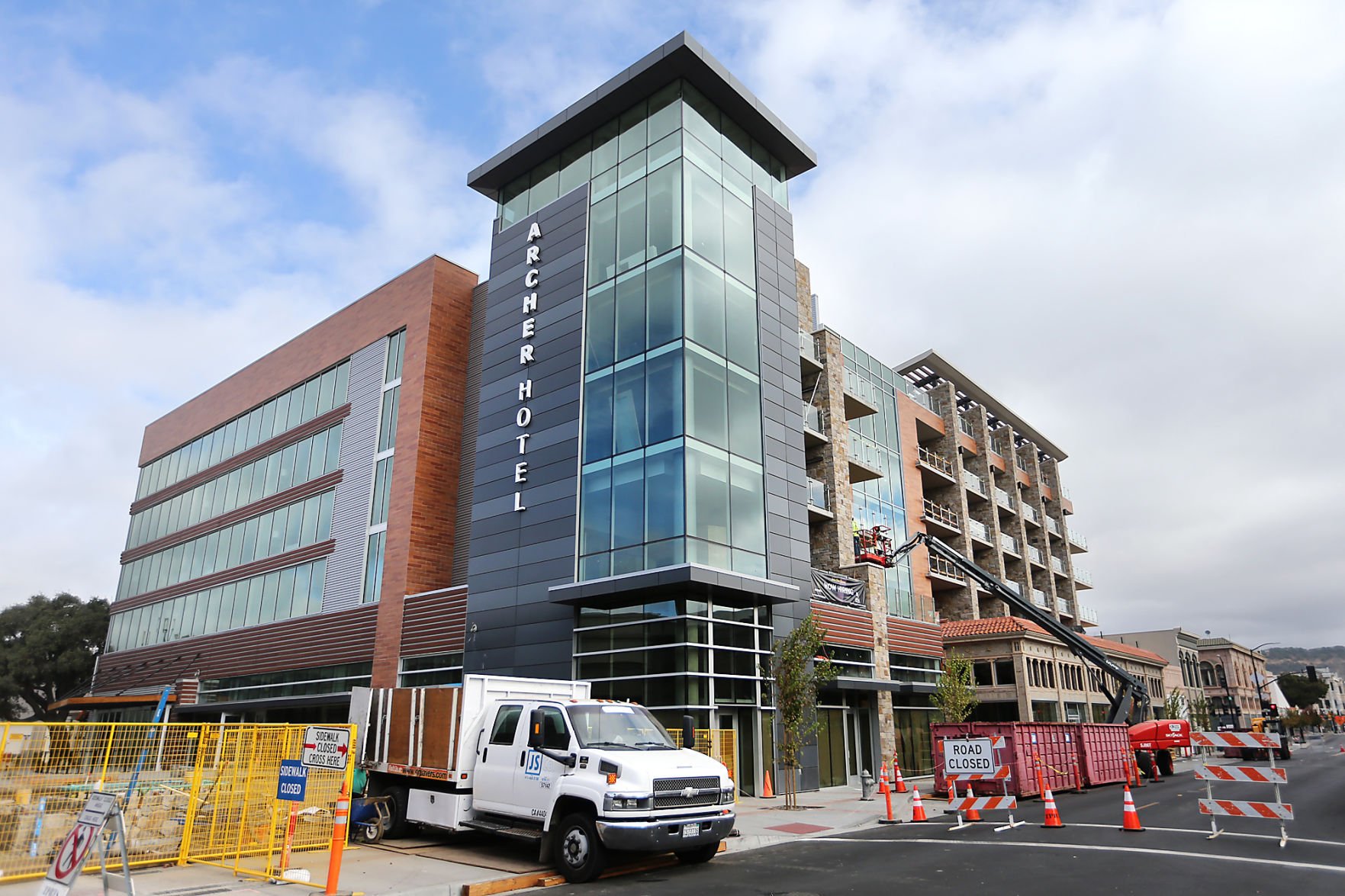 Kudos to Mr. Johnstone for telling it like it is: "You walk in and you think you're in New York." and "How many hotels does downtown need? I hope we're not overdoing it."
Update: 9/29/17 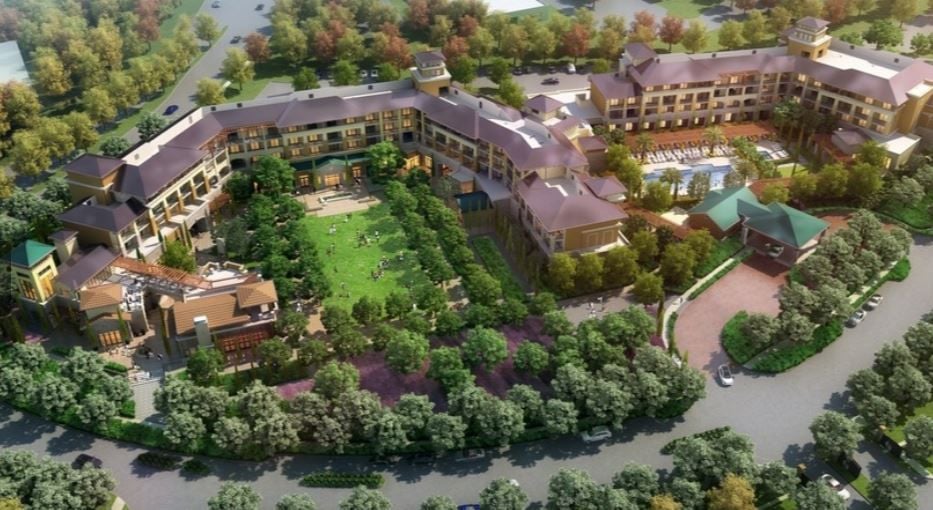 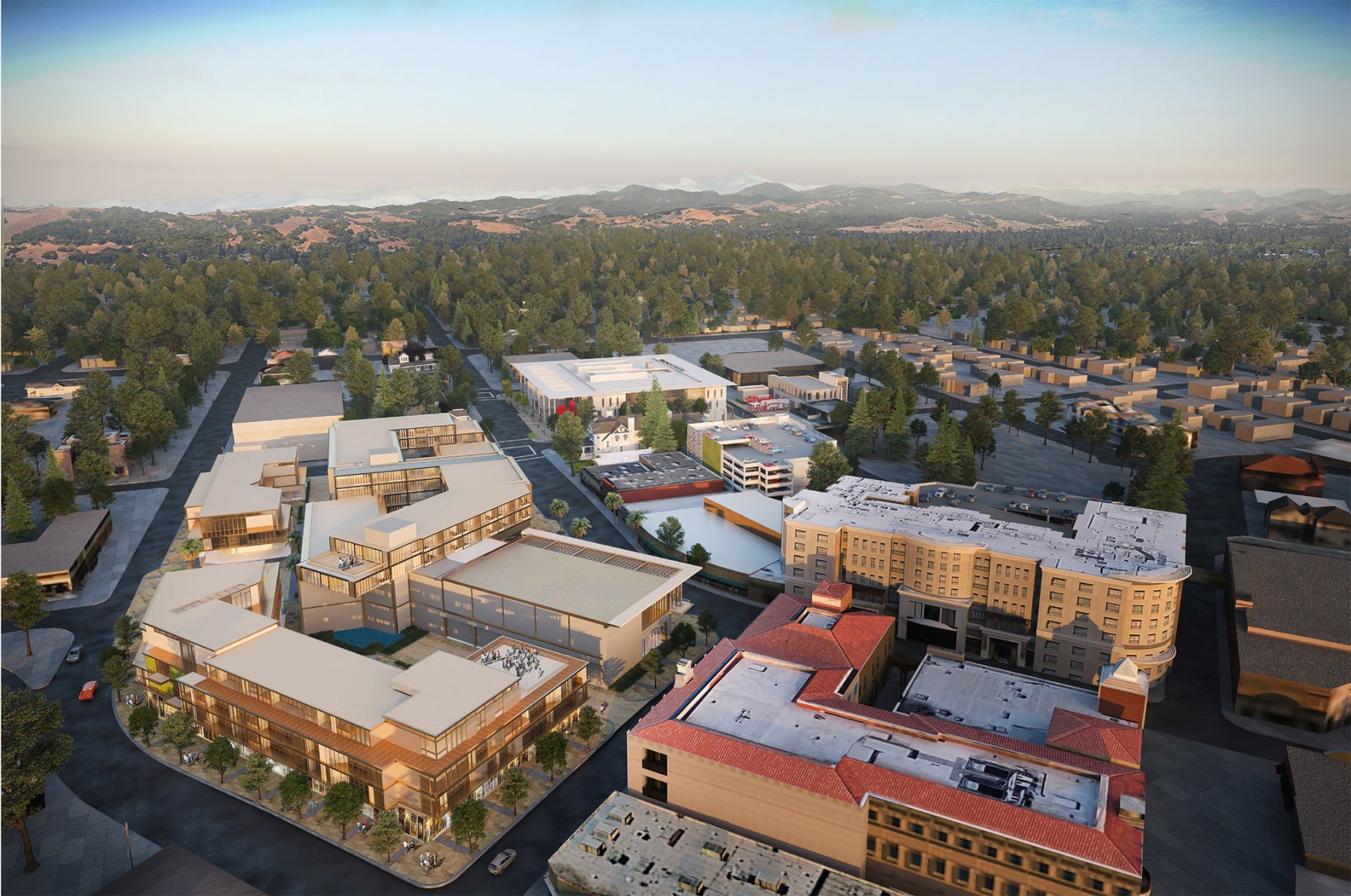 Napa Vision 2050 has just sent out this notice about a staff report to be presented to the Napa City Council on Aug 15th, 3:00pm about the various hotel projects going on in the city. You are encouraged to attend.

Howard Yune, Napa city reporter for the Register, had to previously ask readers what they thought about Napa's hotel explosion, and he gives some of the responses in the above article. He had to ask because the Register, in a blow to the free exchange of ideas in a democracy, decided to discontinue the ability to comment online to news articles last year. There were, no doubt, legitimate concerns leading to the discontinuance. But for those seriously interested in issues in Napa county, like the explosion of hotel development, citizen reaction to the news is an important part of the story. The problems that the paper experienced with responses, I think, had much to do with the anonymity of the posts and the freedom that gives to be irresponsible in posting. Require real names and let the comments continue.

Update: 6/20/17It's hard to keep up with this issue:
NVR 6/25/17: Downtown Napa hotel plan calls for merging Zeller's and former post office sites
NVR 6/22/17: Surging hotel taxes become a larger part of the new Napa city budget
NVR 6/20/17: How many hotels are enough -- or too much? Contact the Register

First, the loss of a community. Hotels not only bring in more tourists, but they increase the 24-hour tourist population. At some point, as the ratio of tourists to residents increases, and as jobs, commercial activity and housing continue to shift from resident-serving to tourist-serving, the sense of normal, small-town community life will be lost to the collective endevour of catering to, and being the local color for, the tourism experience. And the real town and its community will disappear. (St. Helena is at the forefront of this phenomenon.)

Second, a financing dependency. TOT revenue and other in-lieu fees are welcomed as a quick fix for the deferred infrastructure and service costs needed to mitigate the impacts of previous urban development. But low wage jobs are created by the hundreds and the money isn't there for affordable housing. Traffic and parking problems explode. The increased tourism and employee population require additional infrastructure and services which then encourage more new project approvals and so on. Ultimately the place becomes a dense tourist trap, devoid of residents, and, much like Oxbow is now, packed with people wondering what's so special about Napa.

Third, the loss of Napa's rural soul. The number of hotel projects, like the amount of traffic, is a symptom of a community losing it's resitance to development pressure. That pressure was was contained in Napa for the last 40 years by a combination of politicians and citizenry with a clear vision of an un-urbanized future, and an industry dependent on an agricultural product. But as the landscape and vineyards are slowly filled with buildings to exploit the expanding tourist population, the vision of a rural enclave in the urban Bay Area is harder for politicians and their citizens to imagine, and the industry is finding that more money is to be made by providing wine-related experiences than from making wine. The importance of agriculture fades beyond its use as a stageset for TOT-paying visitors.

Update: 6/17/17A neighbor just sent over a link to the latest Napa Life, Paul Fransons's weekly "insiders guide to the Napa Valley." The June 19th, 2017 issue is here. Scroll down to the section on "Lodging News". Below the summaries of the latest hotel projects in the Register he has a list of the projects currently in the approval and proposal pipelines. While I struggle to keep up on this site, as an insider he has a much better handle on these things. And it is a bit freightening.

Most freightening of all is the mention of a Ted Hall 80 room hotel in South St Helena (described in this 2015 NVR article). Ted Hall (recent profile here) is perhaps the most revered grower-vintner in the county, one of the few statesman in an industry filled with entrepreneurs. Each trip to the planning commission to present his winery projects turns into a lovefest (just as the hotel project did). He will probabaly make the most sensitive, ecological integration of agriculture and overnight accommodation it is possible to make. And he will set the precident for lesser lights to follow for the next phase of the "wine" industry in its transition to an entertainment industry. Now that the winery restaurant is firmly established as an acceptable "incidental and subordinate" use allowed at wineries, it is only a matter of time before the winery b&b begins to make its way into the definition of "agriculture" as well. A euphanism will have to be invented - "immersive agricultural experience" perhaps - to make sure no one would mistake a winery for a hotel. But with the precedent set by this most solid citizen of the County, every good-life entrepreneur will now want a hotel-of-their-own to go along with their winery. 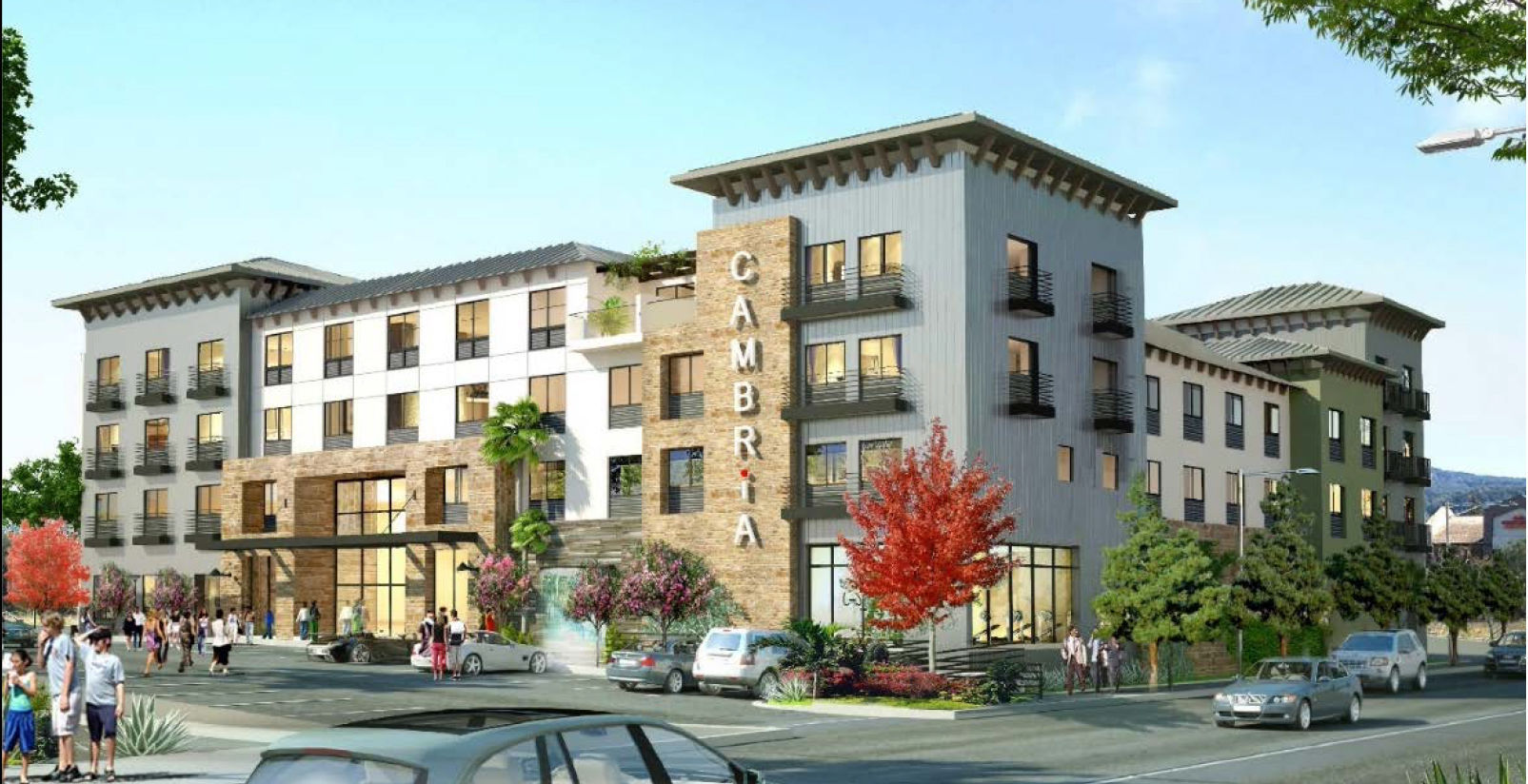 Cohn LTE 6/8/17: Slow the stampede of development and his petition
And the concurrences:
Don and Arlene Townsend LTE 6/16/17: When is enough enough?
Lynn Korn LTE 6/12/17: Enough already
Barbara Cioppone LTE 6/8/17: All for the rich people

In the Times article Napa Vision 2050 is recognized nationally for its efforts to slow the urbanization of Napa County. Kudos to Harris Nussbaum and Patricia Damery.
Jim Wilson on the Napa Vision 2050 Economic ForumIt's exactly the effect we heard is coming at George Caloyannidis' Tourism Economy Forum in April of last year:

Inn at the Abbey