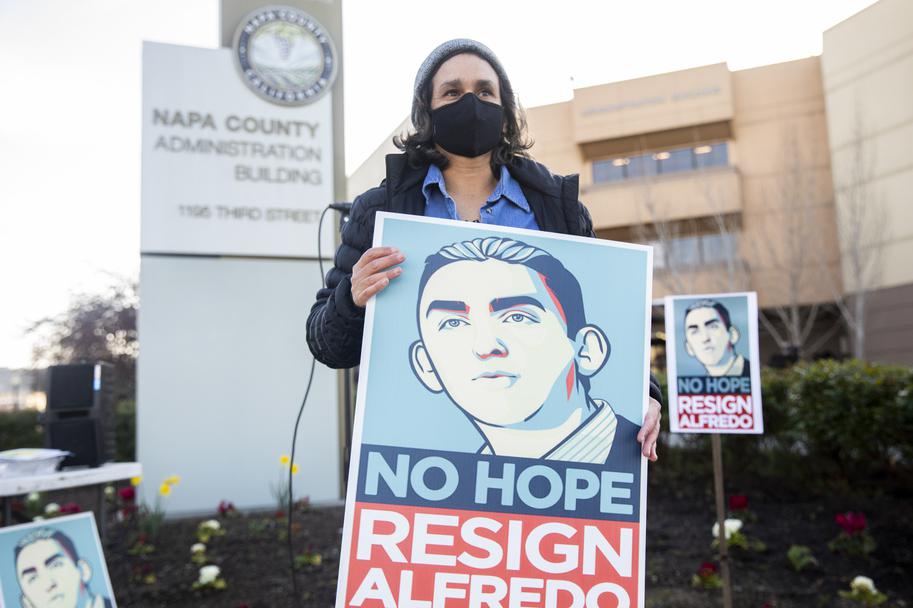 A decision on a long-debated Napa Valley vineyard development, Walt Ranch, has been delayed once again so that Napa officials can reconsider hearings without the vote of a supervisor who has a financial stake in a neighboring property.
The proposed vineyard, Walt Ranch, has been a controversial topic in Napa for 17 years. The property owners, Dallas billionaires Craig and Kathryn Hall, have sought permission from the county to plant grapevines on the undeveloped parcel in Napa’s rural Atlas Peak area.

Environmentalists have long opposed the plan and argue that the property should remain a natural forest, saying a vineyard there would deplete groundwater supply, disturb animal habitats and require the removal of thousands of oak trees.
Over time, Walt Ranch has become the focal point for a larger battle over Napa Valley’s future, pitting the interests of the powerful wine industry, which argues that the property rights of landowners are being ignored, against those of environmentalists, who would like to see the valley unchanged by further vineyard and winery construction.
Now, the community is grappling with the revelation, reported by The Chronicle, that Supervisor Alfredo Pedroza acquired a financial stake in the property adjacent to Walt Ranch last year without disclosing it. That means Pedroza could benefit financially from the approval of Walt Ranch, since it would likely raise the value of neighboring properties. 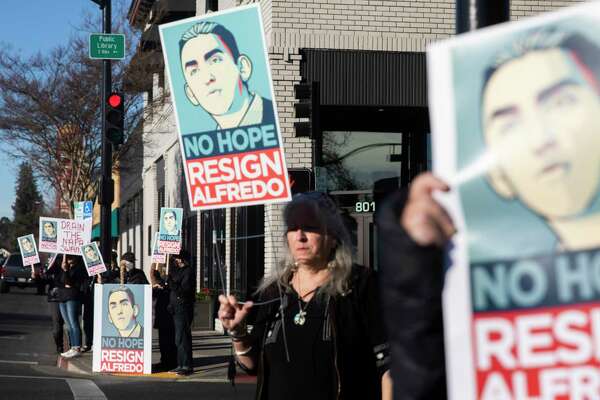 Dozens of demonstrators gather outside of the Napa Administrative Building in Napa on Tuesday to protest Napa County Supervisor Alfredo Pedroza’s involvement in a controversial vineyard proposal.
Jessica Christian/The Chronicle

Pedroza has denied having a conflict of interest. He voted in favor of a proposed greenhouse gas mitigation plan for Walt Ranch in a tentative approval hearing in December, but in February, after the discovery of his financial stake was revealed, he recused himself from future votes related to the project.
Roughly 40 protesters gathered outside the Napa County Supervisors office on Tuesday morning. Many carried signs that resembled President Obama’s “Hope” posters featuring Pedroza’s face and text that read “No Hope” and “Resign Pedroza.” One protester led the group in a sing-along of a Napa Valley-specific version of Woody Guthrie’s “This Land Is Your Land.”
On Tuesday, the board agreed to wait until April 19 for the next Walt Ranch vote, which will represent a do-over of the December hearing and the pre-hearing conference, this time excluding Pedroza. Attorneys for the county recommended this additional delay in light of the controversy surrounding Pedroza, pointing out that the county could end up facing conflict-of-interest litigation if it does not proceed cautiously.
Conflict-of-interest issues on Napa’s Board of Supervisors are not unprecedented, county counsel Thomas Zeleny noted. In 2009, real estate developers sued Supervisors Diane Dillon and Brad Wagenknecht, who voted against approving the developers’ Lake Luciana golf course project, because the supervisors had not disclosed that they were involved with the Sierra Club, which had publicly opposed the project. Wagenknecht recused himself from the vote, Dillon did not. The vote ended in a 2-2 tie and it was deemed that the original decision to reject the proposal would stand.
With Pedroza’s recusal, the next Walt Ranch vote is expected to be a tie as well, which means the Halls’ mitigation proposal would likely still be approved.
As the meeting began, more than three dozen community members came forward to speak about Pedroza. Over the course of two hours, many expressed their support of the supervisor and criticized what they view as a personal attack. Linsey Gallagher, president and CEO of Visit Napa Valley, called it “a toxic level of public discourse.”
Others expressed concerns about Pedroza’s failure to report his connection to the Walt Ranch-adjacent property. Some questioned Pedroza’s morality and called for an external investigation that would look further into a conflict of interest.
When the comments concluded, Pedroza defended his track record of “following the rules” and “ensuring we act with our values and our morals” before addressing the public criticisms he’s received since the Feb. 8 meeting.
“What has been troubling has been the personal attacks on our family,” he said. “I respect all of our individual stories, but what I’ve seen is disappointing. I’ve lost sleep over it. It’s impacted my family.”
Pedroza’s father-in-law, Gallo vineyard worker Esteban Llamas, purchased 400 acres of land next to Walt Ranch in May 2021 for $2 million, through an LLC called Vinedos AP. Pedroza has said he does not have any equity in Vinedos AP and does not have a financial interest in it. However, using his Napa home as collateral, Pedroza signed a personal guarantee for a $2.7 million loan on the property. Other documents reviewed by The Chronicle further link Pedroza to the property, including property-tax checks that he signed on behalf of Vinedos AP.
California law governing political conflicts of interest prohibits public officials from making decisions involving parcels adjacent to properties in which they have a financial interest. The California Fair Political Practices Commission has received eight complaints against Pedroza and is currently determining whether to open investigations into them. In an informal letter, an FPPC representative told Pedroza that a property owned by his father-in-law would not constitute a conflict of interest, as California law doesn’t define a father-in-law as immediate family. An FPPC representative said it could not issue formal advice to Pedroza because it is legally prohibited from issuing guidance on actions that have already taken place.
Critics of Pedroza, who has accepted $35,000 in campaign donations from Walt Ranch owner Craig Hall, seized on the Vinedos AP connection as a final attempt to block the vineyard planting, which had been expected to pass at the Feb. 8 meeting.
The hearings that will be redone relate only to the Halls’ proposed plan for mitigating greenhouse gases, not to the fundamental Walt Ranch project itself, which was approved in 2016. If an appeal is granted, the Halls could submit another proposal for the mitigation. Despite continued delays, some scale of development at Walt Ranch appears likely.
But as many citizens pointed out at Tuesday’s meeting, the issue has evolved beyond Walt Ranch. The new cause of opponents is clear: They want Pedroza out of office and they want to elect environmentally minded officials who will change the trajectory of Napa Valley. For now, they’re back to waiting.